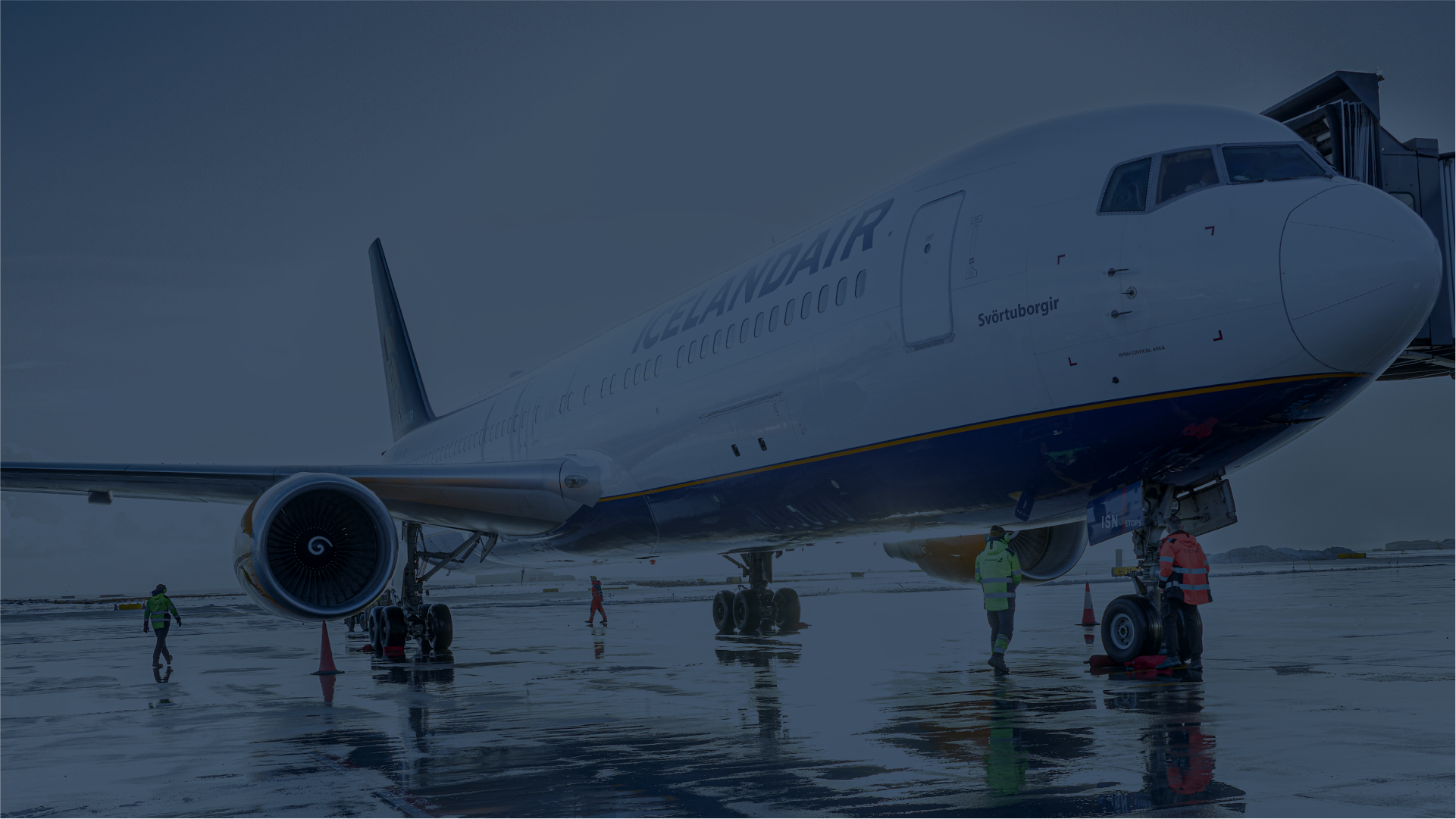 Endorsement and Statement by the Board of Directors and the CEO

Icelandair Group hf. is an Icelandic aviation company with decades' long history of operating in the international airline and tourism sectors. In 2018, the Company resolved to concentrate its focus on its core business, aviation. The business model is built around Icelandair’s route network and the unique geographical location of Iceland which serves as a connecting hub between Europe and North America. Icelandair Group is the parent company of several subsidiaries. The Company’s strategic initiatives support its vision of “Bringing the spirit of Iceland to the world” and its mission of offering smooth and enjoyable journeys to, from and within Iceland – the Company's hub and home.

Operations in the year 2020

The year 2020 was heavily marked by the COVID-19 pandemic whose impact continues to be felt in all realms of society, not least in the aviation and travel industries. This is clearly illustrated by the over 80% reduction in international passenger numbers and ASK year-on-year. Despite the relatively swift development of a vaccine uncertainty in the Company’s operating environment is expected to remain high in the short to medium term while vaccinations are being administered. In the longer term, it further remains unclear when global travel might resume its pre-COVID levels. Following some easing and tightening in the latter half of 2020, travel restrictions and/or strict border controls have been reinstated in nearly all of Scandinavia and continental Europe with a travel ban still in place to and from the US, one of the Group‘s most important geographical segments.

The Group’s business plan and schedule have been revised, and continue to be reiterated, in line with developments in each market. The current assumption is that a modest ramp-up will commence in Q2 but that it will take until 2024 for demand to reach pre-COVID levels. Management assumes that capacity will rationalize in all key markets as airlines will stress preservation of cash and liquidity. Post recent crisis in the 21st century, Icelandair has enjoyed solid operational performance in the years to follow. Iceland’s attraction as a clean, safe and sparsely populated destination is also assumed to be strong in the post-COVID world.

To respond to the situation brought on by the pandemic, the Group took immediate and extensive measures to get through an extended period of minimum operations. These included severely cutting its flight schedule, drastically reducing the number of employees and changes to its organizational structure. At the same time, the Group acted swiftly and seized opportunities arising from the circumstances, such as in the cargo and leasing operations. The Group's overall strategy during the low production period aims at securing the continuity of necessary core operations and safeguarding the flexibility needed for swift ramp-up when markets recover.

The Group underwent financial restructuring which was completed in September with the execution of a successful share offering whereby the Company raised ISK 23,000 million (approx. USD 169 million) in new equity. The offering was a key component in effectuating a series of deferral agreements that the Group had previously reached with various stakeholders that include lenders, lessors, acquirers, the Boeing Company and other vendors. A successful share offering was a condition for the Company's access to a government guaranteed credit facility that was approved by the Icelandic Parliament on 4 September 2020. The credit facility, arranged by two local commercial banks, is in the amount of USD 120 million, 90% of which is guaranteed by the government.

Additionally, investors that were allotted new shares in the offering were also issued warrants to buy additional shares in the Company at certain dates in the future. The warrants, amounting to 25% of the nominal value of new shares sold in the offering, were issued free of charge. If exercised in full, the warrants can raise up to approx. USD 42 million in additional equity for the Company over their lifetime which expires in the latter half of 2022. The warrants have been listed on the Nasdaq Iceland Main Market and can be traded freely independent of the Company’s shares until their respective exercise periods.

Agreements with lenders included renegotiated financial covenants. According to the restructured terms the equity ratio will be the Group's primary financial covenant in the coming quarters, the minimum of which is aligned with the Group's conservative ramp-up plan with a certain flexibility built-in. The covenant is therefore set somewhat below management estimates. The equity ratio shall be a minimum of 8-10% in terms of loan agreements with lenders and a minimum of 2% in terms of the government guaranteed credit facility. The amended equity ratio covenant will be in place until Q1-Q3 2022, depending on lenders, at which time the pre-COVID financial covenants will resume to take effect.

In addition to its market based financial restructuring efforts the Group has received various government offered COVID-19 relief options for companies. Most meaningful were the unilateral reduction of the employment ratio of hundreds of employees which made them eligible for special part-time unemployment benefits, funded by the government, to make up for the drop in salary income, and the lay-off of over 2,000 valued employees that entitled the Group to subsidies of salary costs during those employees' contractual notice periods.

At the outset of the pandemic, the Group and the Icelandic Government entered into agreements whereby Icelandair committed to maintain a certain number of domestic and international flights per week to ensure minimum passenger flight transportation to and from Iceland in cases where these were not commercially viable. The agreements have since been extended several times and are still in effect with regards to flights to the East Coast of the USA.

After being grounded for over 20 months the Boeing 737 MAX aircraft was re-certified by the FAA in November and by EASA in January 2021. The Company assumes to reintroduce the aircraft into its fleet in Q1 2021 following all necessary updates and inspections. As part of its restructuring the Group had prior to re-certification reached an agreement with Boeing regarding additional compensation for financial losses resulting from the grounding of the MAX in early 2019. In addition to financial compensation the agreement includes permanent cancellation of four out of the ten MAX aircraft that the Group is yet to take delivery of. The six aircraft still on order are expected to be delivered during the period Q2 2021 to Q1 2022. Once full delivery is completed the Group will have twelve MAX aircraft in its fleet.

The Company finalized the sale of a 75% equity share in Icelandair Hotels to Berjaya Property Ireland Limited in Q2 2020. The Company will retain its 25% share in the hotel company for a period of at least three years. The total cash consideration for the equity was USD 45.3 million.

The Board of Directors proposes no dividend payment to shareholders in 2021 for the year 2020.

The nominal value of the Company's issued share capital amounted to ISK 28.4 billion at year-end. The share capital consist of shares of ISK 1, that are in a single class bearing equal rights. The shares are listed on the Icelandic Stock Exchange (Nasdaq Iceland) under the ticker symbol ICEAIR. According to the Icelandic Company's Act, companies can acquire and hold up to 10% of the nominal value of issued shares. At year-end the Company did not hold any treasury shares.

The Company's Board of Directors comprises five members, two women and three men. The gender ratio is thus in accordance with Icelandic laws requiring companies with over 50 employees to ensure that the Board has representation from both genders and that each gender comprises at least 40% of the Board Members when Board Members surpass three. The Board Members are elected at the Annual General Meeting each for a term of one year.

Those persons willing to stand for election must give formal notice thereof to the Board of Directors and Icelandair Group’s Nomination Committee at least seven days before the Annual General Meeting.

Further information on matters related to share capital is disclosed in note 28 in the Consolidated Financial Statements. Additional information on shareholders is provided on the Company's website www.icelandairgroup.com.

The Group's management is of the opinion that practicing good Corporate Governance is vital for the existence of the Group and in the best interests of shareholders, Group companies, employees and other stakeholders and will in the long run produce satisfactory returns on shareholders' investment. Corporate Governance exercised within Icelandair Group hf. ensures sound and effective control of the Company´s affairs and highly ethical business practices.

According to the Icelandic Financial Statements Act, the Company has compiled a thorough overview of non-financial information. This includes key areas of corporate responsibilities according to the ESG Reporting Guide – Environment, Society and Governance - issued by Nasdaq.

The Company's policies and outcome of these matters are further discussed in the Non-financial Reporting that form an appendix to the Consolidated Financial Statements.

Statement by the Board of Directors and the CEO

Further, in our opinion, the consolidated financial statements and the endorsement of the Board of Directors and the CEO give a fair view of the development and performance of the Group's operations and its position and describes the principal risks and uncertainties faced by the Group.